Pastor David reads 1 Samuel 9:1-15 and offers a prayer from Ambrose:

Pastor David reads 1 Samuel 8 and offers a prayer from the 5th century Book of Common Prayer:

We praise you, O God; we acknowledge you to be the Lord.
All the earth worships you, the Father everlasting.
To you all angels cry aloud, the heavens, and all the powers therein.
To you cherubim and seraphim continually cry,
“Holy, Holy, Holy, Lord God of Sabaoth,
Heaven and earth are full of the majesty of your glory.”
The glorious company of the apostles praise you.
The goodly fellowship of the prophets praise you.
The noble army of martyrs praise you.
The holy church throughout all the world acknowledge you,
The Father of an infinite majesty,
Your honorable, true, and only Son,
Also the Holy Ghost, the Comforter.
You are the King of Glory, O Christ.
You are the everlasting Son of the Father.
When you took upon you to deliver people, you did not abhor the Virgin’s womb.
When you overcame the sharpness of death, you opened the Kingdom of Heaven to all believers.
You sit at the right hand of God in the glory of the Father.
We believe that you will come to be our Judge.
We therefore pray, help your servants, whom you have redeemed with your precious blood.
Make them to be numbered with your saints in glory everlasting.
O Lord, save your people and bless your heritage.
Govern them and lift them up forever.
Day by day we magnify you.
And we worship your name, world without end.
Vouchsafe, O Lord, to keep us this day without sin.
O Lord, have mercy upon us; have mercy upon us.
O Lord, let your mercy lighten upon us, as our trust is in you.
O Lord, in you have I trusted; let me never be confounded.

Come, thou Fount of every blessing, tune my heart to sing thy grace;
Streams of mercy, never ceasing, call for songs of loudest praise.
Teach me some melodious sonnet, sung by flaming tongues above;
Praise the mount! I’m fixed upon it, mount of thy redeeming love.

Here I raise my Ebenezer; hither by thy help I’m come.
And I hope, by thy good pleasure, safely to arrive at home.
Jesus sought me when a stranger, wandering from the fold of God.
He, to rescue me from danger, interposed his precious blood.

O to grace how great a debtor daily I’m constrained to be!
Let thy goodness, like a fetter, bind my wandering heart to thee.
Prone to wander, Lord, I feel it; prone to leave the God I love:
Here’s my heart, O take and seal it, seal it for thy courts above.

More of your presence, Lord, impart;
More of your image let me bear;
Erect your throne within my heart,
And reign without a rival there.

Pastor David reads 1 Samuel 5 and offers a prayer from Irenaus:

I pray to you, Lord God of Abraham, Isaac, and Jacob, Father of our Lord Jesus Christ. You are infinite in mercy, and it is your will that we should learn to know you. You created heaven and earth; you rule over all. You are the true, the only God, and there is no other god above you. Grant, through our Lord Jesus Christ and the working of the Holy Spirit, that all may come to know you, for you alone are God. Let them draw strength from you and be kept from all teaching that is heretical or godless.

Pastor David reads 1 Samuel 3 and offers a prayer from Ignatius of Loyola:

Take, Lord, and receive all my liberty,
my memory, my understanding,
and my whole will.
All that I have and call my own,
you have given to me.
I surrender it all to you
to be disposed of according to your will.
Give me only your love and your grace;
with these I will be rich enough,
and will desire nothing more.

I used to love playing the board game called Puerto Rico. It’s a well-designed strategy game in which each player builds a mini-civilization on their own island of Puerto Rico. Various crops can be raised (like corn, sugar, and coffee) and then shipped back to Europe or sold at the local trading post. Many buildings can be purchased and built, which enhance a player’s production, shipping, and trading. The gameplay mechanic is really fascinating, too: there are a certain number of “roles” that players can choose from each round, such as settler, trader, captain, or builder. When a player chooses a certain role on their turn, that player gets a specific bonus, and then all the players can take the actions of that role. 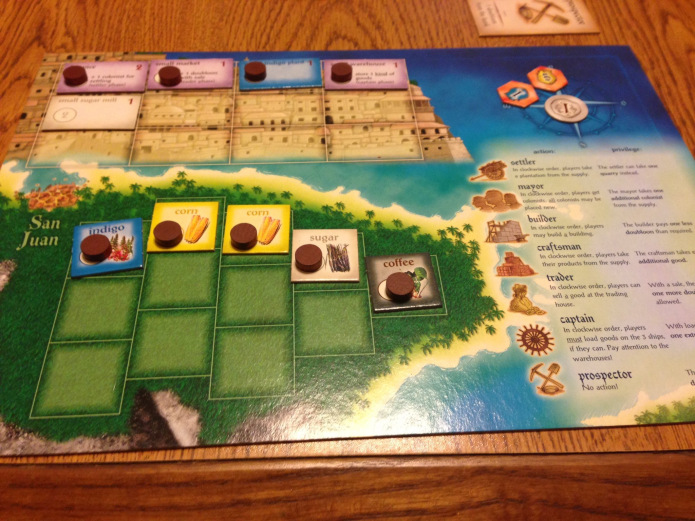 I love strategy games like Puerto Rico. The dynamics of the game, the strategy of how you will try to amass the most victory points, the choices that affect not only your board but the boards of other players – I find that kind of game really enjoyable.

But there’s a problem. I said at the outset that I used to love playing Puerto Rico. I don’t anymore.

Why? Well, I’ve left out one key part of the game. For any of your settlements or buildings to function, you need to staff them with people. Otherwise, they will sit empty and not do anything at all. In this game, the people are referred to as “colonists” and are represented by small, round, brown tokens.

Brown “colonists.” They literally arrive on a ship and are put to work on your island of Puerto Rico, working in fields or buildings as you direct them. You can shuffle them around, but they never leave your island.

There is another word for these brown colonists, a word that the game’s creators conveniently omit: slaves.

Because that’s the real history of Puerto Rico and so many other locations in the western hemisphere. Brown “colonists” were brought over on ships from Africa and were made to labor at their masters’ discretion. But they were not colonists at all. They were slaves.

You may have seen on the news recently that a new federal holiday has been approved by Congress. That holiday is called Juneteenth, and it celebrates the end of slavery in the United States. Juneteenth occurs on June 19 every year, because it was on June 19, 1865, that slaves were proclaimed free in Texas by the victorious Union Army.

To be honest, I had never heard of Juneteenth until about two or three years ago. I never knew about this important day in American history and this important celebration for African Americans – for all Americans. I grew up in Indiana, and Juneteenth simply was not part of the education I received, either in school or at church or in society. But I’m starting to learn, a little bit every year, just how significant Juneteenth is.

The point of all this is to say that I need to grow and change. I need to learn. I need to listen. I need to ask questions, seek answers, and knock on doors that I never even knew existed. I need to join in celebrating Juneteenth and to continue the pursuit of liberty and justice for all.

I probably will never play the board game Puerto Rico ever again. But I look forward to celebrating Juneteenth with every passing year. And I hope I keep learning to uncover the blind spots in my vision – or, rather, the planks in my own eye. (Matthew 7:1-12)

Pastor David reads 2 Samuel 2:12-26 and offers a prayer from Teresa of Avila:

Govern all by your wisdom, O Lord, so that my soul may always be serving you according to your will, and now as I desire. Do not punish me, I pray, by granting what I want and ask, if it offends your love, which would always live in me. Let me die to myself, that I may serve you; let me live to you, who in yourself are the true Life.

Lord God, who by the grace of your Holy Spirit has poured out your love into the hearts of your faithful people: Mercifully grant to those whom we love health of body and soul; that they may serve you with all their strength and gladly fulfill all your good pleasure; through Jesus Christ our Lord.

Pastor David reads 1 Samuel 1:1-20 and offers a prayer from Basil the Great:

O God and Lord of the Powers, and Maker of all creation, who, because of your clemency and incomparable mercy, did send your Only-Begotten Son and our Lord Jesus Christ for the salvation of humankind, and with his venerable Cross did tear asunder the record of our sins, and thereby did conquer the rulers and powers of darkness; receive from us sinful people, O merciful Master, these prayers of gratitude and supplication, and deliver us from every destructive and gloomy transgression, and from all visible and invisible enemies who seek to injure us. Nail down our flesh with fear of you, and let not our hearts be inclined to words or thoughts of evil, but pierce our souls with your love, that, ever contemplating you, being enlightened by you, and discerning you, the unapporachable and everlasting Light, we may unceasingly render confession and gratitude to you: the eternal Father, with your Only-Begotten Son, and with your All-Holy, Gracious, and Life-Giving Spirit, now and ever, and unto ages of ages. Amen.